In June 2013 two great great granddaughters of Mrs Jay, the last resident of Blendon Hall, met for the first time. Margi Carlson, who lives in USA, made a trip to the UK, first visiting Blendon and then travelling to Lincolnshire to meet her cousin, Rowena Ward-Barrow.

Cousins Rowena and Margi meet for the first time

Rowena says: “When we met on the station platform, we immediately felt in tune with one another, as though we had known each other for years.  The couple of days we have spent together have confirmed that feeling.  We have studied photos and papers together and learnt a lot about one another’s families and their various quirks.” 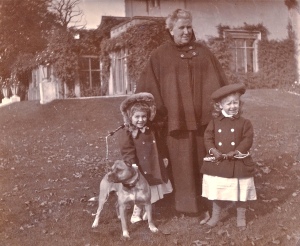 The three-year-old cousins, Irene Phipps-Hornby (left) and Valerie Jay (right) shown in the grounds of Blendon in 1898, accompanied by their nurse